Pantry Pests: Who Else Might Be Eating Your Cereal?

Home / blog / Pantry Pests: Who Else Might Be Eating Your Cereal?

Pantry Pests: Who Else Might Be Eating Your Cereal?

Several insects attack cereals, herbs, spices, chocolate and similar items in your home without your notice. Here are the common pests inhabiting your pantry and probably munching on your cereal, flour, and other cooking ingredients. 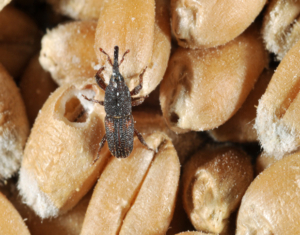 Rice weevils measure approximately 4 mm in length. They are reddish brown in color with the wings having faint yellow or red patterns. Rice weevils are troublesome pests usually found in warm, agricultural habitats such as the southern United States. Rice weevils don’t cause direct harm to humans. Their feeding habits can, however, cause grain loss. The larvae eat the kernel from the inside out, resulting to an emptied husk. The female weevils puncture kernels to lay eggs inside.
a
Indian meal moth

The Indian meal moth is usually 9mm in length. It feeds on seeds, dried fruits, grain and grain products, crackers, candies, nuts, powdered milk, dried red peppers, and cracked corn, among others. The Indian meal moth lay its eggs on or near the food source. It can deposit from 40 to 350 eggs. When the eggs are hatched, the caterpillars spin silken threads in the food material and feed for about two weeks.

Though these creatures seem not to harm humans directly, they can be troublesome as they damage our food. Be keen on spotting the pantry pests because are usually not noticed in the home until they become abundant.